Rhea Chakraborty appeared at the airport with the family, wrote a special message for men in T-shirt

Rhea Chakraborty, who was the girlfriend of Sushant Singh Rajput, appeared after a long time. In the case of Sushant, a photo of Riya, who is in the headlines, is again viral again. 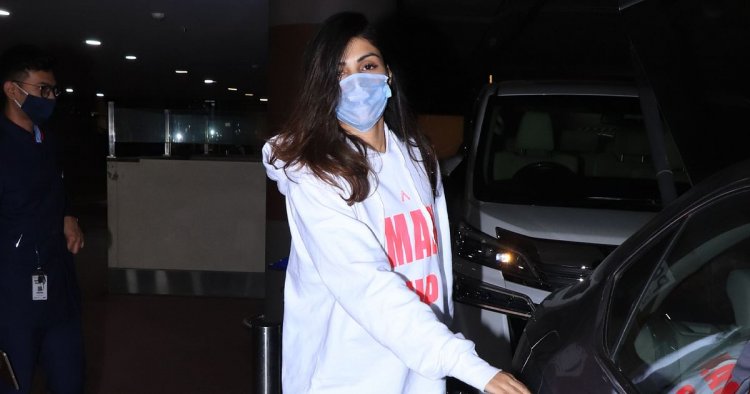 Mumbai: Bollywood Actress Rhea Chakraborty has been keeping distance from social media and media ever since her name came up in the death case of Sushant Singh Rajput. Rhea is rarely seen in public places. Meanwhile, Rhea Chakraborty appeared at the Mumbai airport along with her father Indrajit Chakraborty and brother Shovik Chakraborty. Rhea was wearing a white colored hoodie. A slogan was written giving a strong message on the hoodie. Riya's slogan photo is becoming viral on social media.

Rhea who was arrested for the drugs case is on bail now and was seen with her family on Sunday. Rhea's hoodie read, 'Man Up'. This photo of Riya remains a matter of discussion. Different meanings are being derived from this slogan.

Rhea Chakraborty is not being discussed for the first time about any dress. In the past, Rhea has been seen wearing different slogan T-shirts on several occasions. Recently she wore a T-shirt on which a similar message was written. The photo with this t-shirt also went viral. Rhea Chakraborty is fully active now after Sushant Singh Rajput case. Rhea Chakraborty, while talking to the media a few days ago, said that 'she will start working soon'.

Recently, there was a lot of discussion about the absence of Rhea Chakraborty in the release poster of the film 'Faces'. The upcoming film 'Faces' by Bollywood actor Emraan Hashmi and century superstar is going to be released in the theater on April 30. Rhea has not been shown in the poster associated with this film of Rumi Jaffrey, while Rhea is a part of this film

How a positive mindset turned over the luck : 2 lakh earning per month by Home Delivery...