Now it is difficult to find heart in Chautala family, OP Chautala's big statement on the merger of JJP and INLD

Cahutala Family Now it is difficult to find hearts in the Chautala family and the never ending distance has come in this family. JJP President Ajay Chautala's proposal of unity has also been rejected outright by his father Omprakash Chautala. 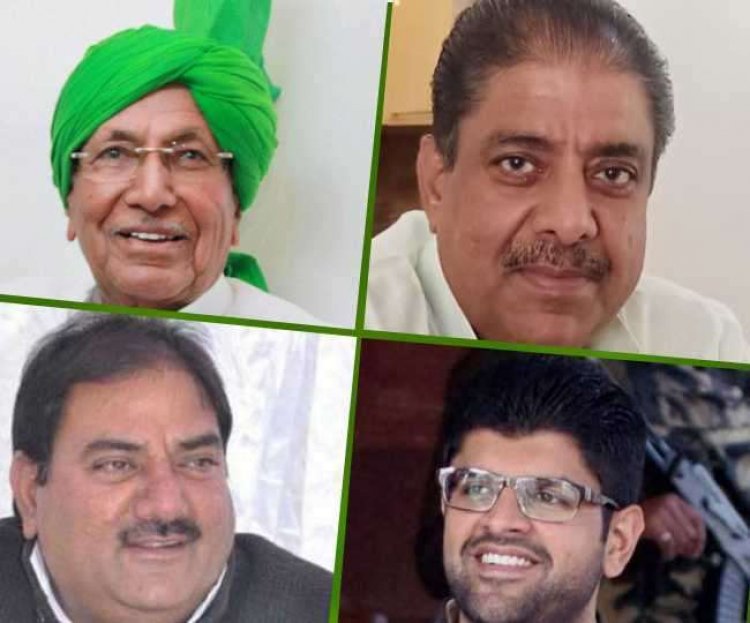 Chautala Family: In Haryana, the Chautala family is finding it difficult to find hearts and it seems that there is an unending distance in the family. The way his father Omprakash Chautala has rejected the offer of unity in the family of Jannasak Janata Party President Ajay Singh Chautala, it is clear that now unity is not possible in this political family.

Amidst the prospects of forming a third front against the BJP-JJP alliance in Haryana, INLD chief Om Prakash has made it clear that the merger of his son Ajay Singh Chautala-led Jannayak Janata Party and INLD is not possible under any circumstances. Ajay Singh Chautala, who was released from jail after completing the sentence, had said that if his father Omprakash Chautala wanted then INLD and JJP could be united. What will be its terms and conditions, it is a matter of later.

Omprakash Chautala and Abhay Chautala have said many times in the past that merger of INLD with JJP is not possible, but whenever there is a possibility of merger, Ajay Chautala throws the ball in the court of his father and younger brother. The old worker is confused by this bowling going on in the Chautala family.

INLD chief Omprakash Chautala remains politically active despite the age of 87. Nowadays he is on a tour of the state and is actively participating in people's marriages and social programs. Even at this stage of age, Chautala faces the questions of the media very well and answers them well. His son INLD General Secretary Abhay Chautala is exploring the possibility of forming a third front against the coalition government in Haryana. Abhay This morcha may include two dozen leaders like former Union Minister Birender Singh and former CPS Rampal Majra, who have a bearing on Haryana's politics and are currently not asking much in their current parties.

Abhay Chautala has also met Chief Minister Manohar Lal recently. Although Abhay's opponents are linking his meeting with the Chief Minister to a mixture of saffron and green, sources say that Abhay has met Manohar Lal to get the announcements made by the CM during the Ellenabad by-election.

The supporters of JJP President Ajay Chautala, who returned after completing the sentence in the JBT teacher recruitment case, are looking at the meeting of Abhay Chautala and Manohar Lal with a political lens, but at the same time they also feel that this meeting is going to cause some kind of harm for the JJP. Absolutely not. Dushyant supporters are restless with this meeting.

Ajay Chautala had said soon after his release from jail that if Bade Chautala wanted then INLD and JJP could be expected to be united, but Omprakash Chautala has made it clear that both the parties can no longer be united. Now the matter has gone too far. INLD has been facing political ups and downs and one day it will overcome it. Chautala has tried to send a message through an example that because of the generosity of INLD, BJP has been a partner in power in Haryana many times.

Omprakash Chautala says that despite the wishes of Atal Bihari Vajpayee, we did not have any minister in his government. When the Vajpayee government was out of power, it was only because of the INLD's vote that it returned to power. BJP wanted 45 seats in Haryana. At that time, Manohar Lal was the General Secretary of the BJP, but the BJP was also assuming that no matter what the seat-sharing ratio was, Chautala had to become the Chief Minister. In such a situation, the interests of both the parties did not come in the way.

Chautala acknowledges the power of unity in Mulayam's family

INLD chief Omprakash Chautala is unable to ignore the family's power in politics. On the question related to the results of the assembly elections in Uttar Pradesh, he said that Mulayam Singh Yadav's family has become completely united there. Because of this, problems have arisen in front of the BJP to form the government.

Chautala said that I am neither an astrologer nor a journalist, but I can say with such a claim that BJP is not coming to power again. When SP can come in government with the unity of Mulayam Singh's family, why can't the Chautala family be united in Haryana? On this question, Bade Chautala started telling the achievements of the old INLD government under his leadership and the agenda for the future.