The passage on both sides was interrupted due to the massive container ship Evergreen being wrongly trapped in the Suez Canal. Due to this, every kind of supply through the sea was interrupted. It has taken a lot of effort to start again. 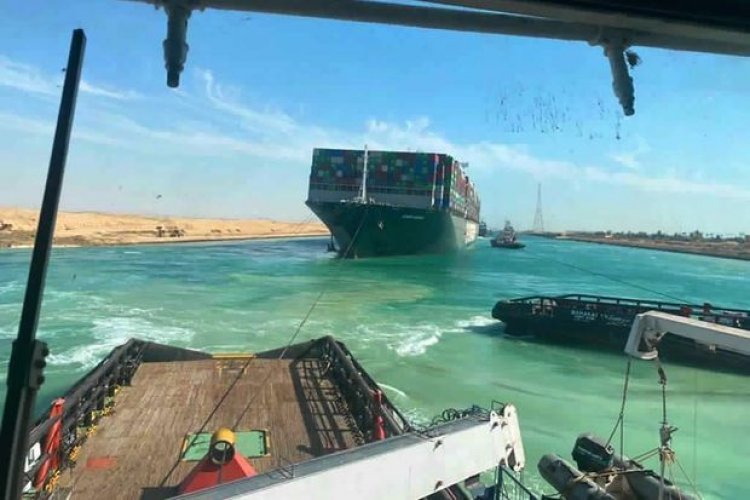 The Suez Canal is one of the shortest waterways between the Red Sea and the Bhoomi Sagar. Its importance can also be gauged from the fact that this route transforms a distance of 7000 km into a mere 300 km. This saves the time of shipping vessels by sea and also reduces the cost. Due to this route, ships get bounced off the continent of Africa and go into the ocean. It works just like the Panama Canal. The Suez Canal is about 194 km long.

The importance of this canal can also be gauged from the fact that in the year 2020, 18500 ships (on average 52 ships everyday) passed through this canal. If a ship had to travel around the continent of Africa to go to the Mediterranean Sea, then it would have to travel 7 thousand km. With this, this journey will be several days. This is being said because this route was closed for the last seven days. The reason for this was the Evergreen container ship stuck in this canal, which got stuck in it diagonally on 23 March.

Before proceeding further, let us first tell you that this canal was officially started on 17 November 1869. It was further widened by the Egyptian government in August 2014, after which the rapid shipments from here were ensured, which was later opened in August 2015. It cost about 60 billion Egyptian pounds. However, it was officially opened on 24 February 2016.

20 thousand tons of sand was extracted

Currently, it has been successful in pulling the Evergreen container ship Evergreen, trapped in the Suez Canal, directly from the tug boat. Now it has moved towards Great Bitter Lake. With the help of huge excavation machines, about 20 thousand tons of sand were extracted from the bottom and the vicinity of the ship. After this with the help of about 14 tug boats, this huge container shimp was straightened and then pulled. This ship was stuck in the canal for about a week. Companies have breathed a sigh of relief on the opening of this important sea route. Due to the ship getting stuck in the canal in this way, goods worth $ 900 million have faced delays in reaching their destination.

The reason was a technical problem

Let me tell you that this Japanese company is registered in Panama under the name Shoei Kisen KK and it is operated by Evergreen Marine Company. According to the owner of this company, Yukito Higaki, there is no problem in its propeller and rudler due to the ship being stuck in this way. The 400-meter-long ship was on its way from Malaysia to the Netherlands. This container ship was comparable in size to New York's Empire State Building. Bernhard Scholt Ship Management has issued a statement saying that the ship has not caused any pollution in the canal nor has any damage to the ship. The reason for the ship being stuck in this way was not disclosed in the statement, although the problem of mechanical and engine disturbances has not been ruled out for this.

Significantly, on March 23, due to this container ship getting stuck, 300 km long jam was in the sea and about 300 ships which had various types of goods loaded stopped at their place. Because of this, companies have suffered losses of crores. According to Admiral Osama Reby, Head of the Suez Canal Authority, the reason for this ship being trapped in the canal earlier was the strong wind but later he said that it was not due to bad weather but due to human or technical mistake behind it. Due to this ship got stuck in the canal and all the traffic stopped.

Let us tell you that the effect of this ship getting stuck in the canal has also been seen on the markets all over the world. Crude oil in particular has a movement. Ships carrying crude oil to different parts of the world have been stranded for almost a week due to this. Some companies changed their route due to this and decided to go all the way to the land of the continent by circling the continent of Africa. However, because of this, the freight cost of the companies increased and at the same time the time to reach their destination has also increased.

So far, 500 protesters have been killed at the hands of Security Forces in Myanmar.