So far, 500 protesters have been killed at the hands of Security Forces in Myanmar. 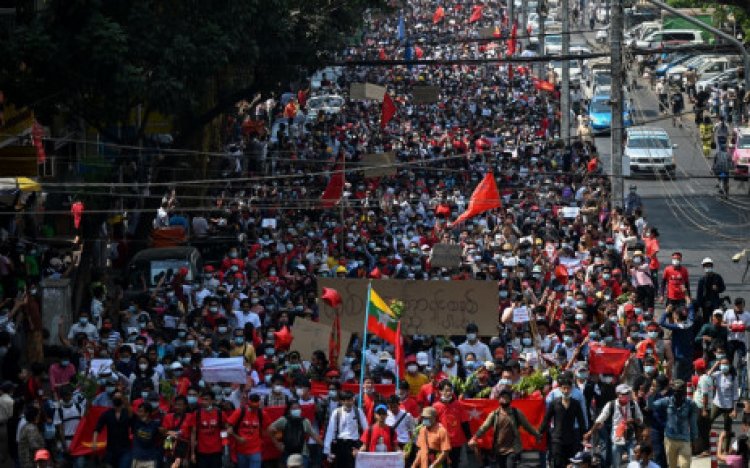 The situation in Myanmar is becoming increasingly uncontrollable. On Monday, the Myanmar Security Force protested against the military regime and opened fire on demonstrators, killing five protesters. Three of them died in Yangon and two in Mingyan. According to the Assistance Association for Political Prisoners Advocacy Group, about 464 people have been killed at the hands of the Security Force since the demolition of the democratic government in Myanmar on 1 February. According to the advocacy group, their actual number may be more.

According to eyewitnesses, the Security Force used a heavy caliber weapon to chase down the protesters on Monday. However, nothing can be said about this weapon so far as to what it was. Myanmar State Television has said that the Security Force has used weapons used to stop the riot in order to stop the protesters. When she tried to talk to the junta's spokesperson, she failed.

Let me tell you that two days ago 114 protesters were killed in Myanmar by the Security Force. Since 1 February, there has been a demand to restore the democratic system on the streets of Myanmar. Hundreds of protesters are protesting against military rule in different parts of the country every day. At the same time, the military regime is brutally crushing the voice of these protesters. Internet service has been shut down in the country since the coup and media has been banned. All the leaders, including Myanmar's Chief Counselor Aung San Suu Kyi, have been in custody since the coup. The military regime alleges that Suu Kyi gained power through rigging in the November 2020 election. In addition, the military regime has severely accused Suu Kyi of corruption.

Significantly, a report by Amnesty International recently said that in Myanmar, the Security Force is using the weapons that are used during the war. It was also said in the report that more people have lost their lives than the number of protesters who died. According to Reuters, since the coup in Myanmar, many people have come to the border in Mizoram, India. However, India has made it clear that these people cannot be called refugees.

Strict on military coup in Myanmar, US bans trade deal

One year of withdrawal of troops from Afghanistan, US President...

Biden government's opinion changed on the theory of lab-leak...