After President Joe Biden came to power, the first high-level talks between China and the US were held in Alaska, with sharp clashes between the representatives of the two countries. 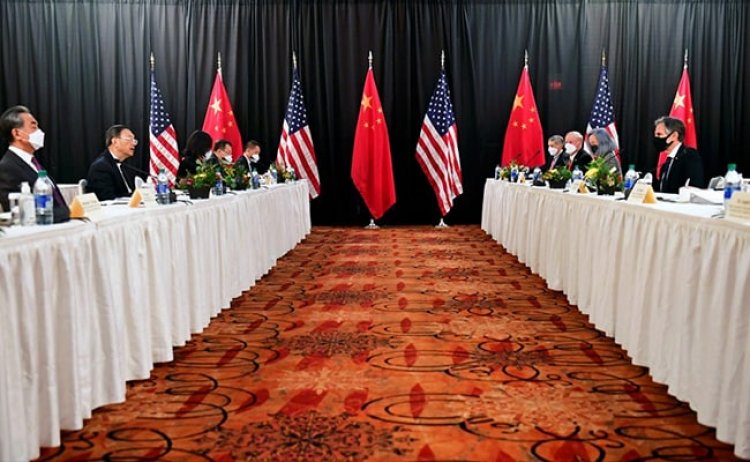 News agency Reuters has written that 'On a public platform, this level of meeting of two powerful countries has rarely seen such a tip-off.'In this meeting, Chinese officials accused the US of 'provoking other countries to attack China', while the US said that 'China has reached this conclusion without thinking.'The relations between China and the United States are in the most tense situation in the current era and the same situation has been there for the last few years.

America has decided that it will continue to raise the issue of 'Weigher Muslims' in talks with China.

'Debate' lasted more than an hour

At the same time, China has said that 'If America was thinking that China would bow down in front of them, then they were in deception'.In front of the cameras, China's top diplomat Yang Jiechi and Foreign Minister Wang Yi had a heated debate with US Secretary of State Antony Blinken and National Security Advisor Jake Sullivan.

At the beginning of the talks, Blinken stated that "the US will continue to discuss its deep concerns about the cyber attacks on Xinjiang, Hong Kong, Taiwan, the US, and the economic pressure that has been imposed on our allies as they speak for global stability." Must be. "

In response, China's top diplomat Yang accused the US of 'misusing its military power and economic domination, bullying other countries and trying to suppress them'.He said that "America abuses so-called perceptions of national security to hinder normal trade exchanges and provoke some countries to attack China."Referring to the Black American people, Chinese officials said that "the state of human rights in America is at the lowest level".

From there, Sullivan said that 'America does not want any quarrel with China, but we stand and stand with our people, our principles and our friends'.This debate of representatives of both the countries continued for more than an hour in front of the media all over the world.

Subsequently, US officials accused the Chinese representatives of violating the protocol. It was told that at the commencement of the debate, the two sides are given two minutes to put their point, but the representatives of China cut the talk in between.

A senior US official said, "It seemed that the Chinese delegation had come there to show off. They resorted to theatricality rather than talking on the issue."

The Biden administration has described this attempt to improve America's relations with China as 'the biggest geopolitical test of the 21st century'.China also wants that its relations with the US, which were almost over at the time of Trump administration, should be rectified.Wang, the most senior member of the Chinese delegation, said that China is ready to open avenues for constructive dialogue with America.

Indo-Pak talks: Indo-Pak sharing of Indus water will be important meeting from tomorrow,...

YouTube: Thousands of people fell victim to this beautiful...

Children infected with coronavirus need to be careful,...