Turkey: Ardoan's decision is why women are seen on the road 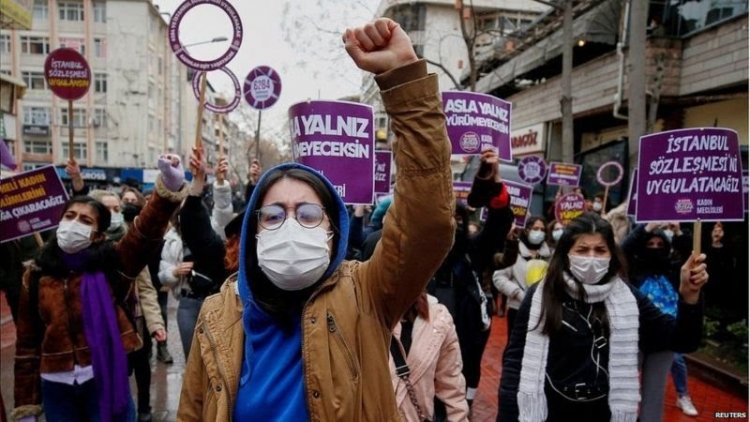 This week has been very difficult and worrying for women in Turkey.

Last Friday at midnight, President Rechep Tayyip Ardoan issued a decree. It said that Turkey will no longer accept the 'Istanbul Agreement on Violence Against Women'.

Women have taken to the streets all over Turkey against this declaration. A plan is being made to oppose it in the future as well.

This agreement is a legally binding treaty (Council of Europe Treaty). Domestic violence has been included in this and the legal apology to the culprits has been eliminated. 34 European countries are included in this law which was enforced in 2014.

The protesters were repeating slogans of 'Istanbul compromise saves lives' and 'We do not accept the decision of a human being' in their protests.

Women’s rights activists, lawyers and opposition leaders condemned this decree of Ardoan. They said that it is illegal for Turkey to come out of the international agreement approved by the Parliament.

Every day women are killed in Turkey and critics argue that the latest step has wrapped women in more dangerous situations.

According to Turkey's 'We Will Stop Famicide', at least 300 women were killed in 2020. Of these, many were murdered by his their associates. Apart from these, 171 women were found dead under suspicious circumstances.

Turkey was the first country to ratify the deal by unanimous vote in parliament in 2012. The Women and Democracy Association (Kadam), whose vice-president is the daughter of President Ardoan, gave his support to this campaign.

Turkish President Ardoan, while praising the agreement, also said that Turkey is a leader in gender equality.

Russia gave big indications about the supply of gas to...