Indian Prime Minister Narendra Modi arrived in Dhaka on Friday for a two-day visit to Bangladesh.At the same time there was protest in Chittagong against his visit where 4 people died. 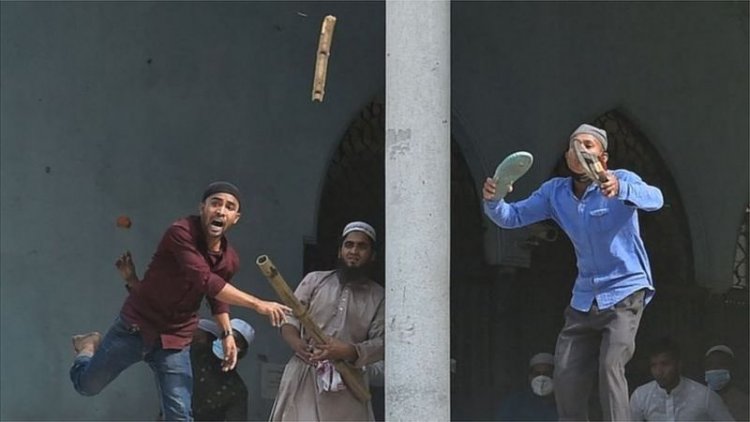 Indian Prime Minister Narendra Modi arrived in Dhaka on Friday for a two-day visit to Bangladesh.

At the same time, there were protests in Chittagong, Bangladesh to protest against his visit, during which four people have died in violent clashes with the police.

A policeman has confirmed that the four injured were taken to the hospital after which they died in the hospital.

Demonstrations were also held in Dhaka

Earlier on Friday, there were protests after namaaaz in Betul Mukarram area of ​​the capital Dhaka in protest against PM Modi's visit.

During this, there was a clash between police and protesters in which many journalists were also injured.

According to Bangladesh media report, a protest march came out of the Hathazari madrasa after the namaaz in Chittagong, which was followed by violent clashes.

Many people have been injured in these clashes with the police.

A Chittagong Medical College official told  that at least four injured people brought to the hospital have died.

Mufibur Rahman Hamidi, leader of the Hifazat-e-Islam organization, has confirmed that some of his protesters have died.

They claim that the police started firing on the protesters. However, this has not been independently verified.

Stone pelting at the police station

Quoting policemen, Dhaka newspapers reported that some people pelted stones at the Hathazari police station during the demonstrations.

In order to drive away the violent protesters, the police fired in the air, in which many people were injured.

In the last few days, many Muslim leaders and leftist organizations are holding rallies in protest against the visit of Indian Prime Minister Narendra Modi. They claim that 'Sheikh Mujibur Rahman fought for a secular nation while Modi is communal.'

PM Modi arrived in Dhaka on Friday at the invitation of Bangladeshi Prime Minister Sheikh Hasina.

He has come here to attend a program organized on the occasion of 50 years of Bangladesh independence and the birth centenary of founder Sheikh Mujibur Rahman.

NASA postpones launch of Moon rocket for the second time...

Floods In Pakistan: Floods continue to wreak havoc in Pakistan,...