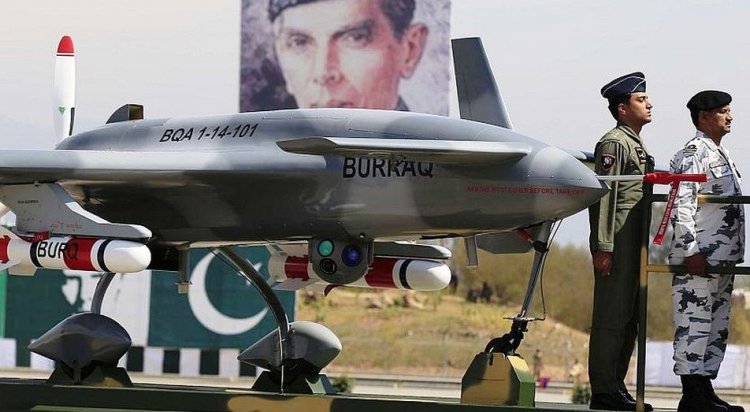 Amid Taliban efforts to strengthen its grip on Afghanistan, it has been claimed that Pakistani drones are supporting the Taliban in the campaign to eliminate anti-forces.

What are the claims on drones?

Taliban fighters are fighting anti-fighters in Kabul's northeastern Panjshir province. Opposition forces are trying to prevent this last stronghold of Afghanistan from going into the hands of the Taliban.

Recently, there were claims that Pakistani drones were used to help the Taliban by targeting opponents' targets.

One of the main sources in the news was Afghan journalist Tajuddin Soroush. He says he was told by Panjshir Governor Kamaluddin Nizami, "Pakistan bombed the Panjshir Valley in Afghanistan with drones."

Other sources had claimed that airstrikes were carried out on some targets, the capacity of which only Pakistan has.

Many of these claims were widely shared on social media and said this was evidence of Pakistani interference in Afghanistan's affairs.

Iran and Indian media have reports alleging Pakistan's involvement in the attack. Some of these reports also use misleading photographs of the Pakistani army describing weapons. However, Pakistan as well as the Taliban has rejected the claims.

Pakistan Army spokesman General Babar Iftikhar told the BBC that it was a "complete lie" and that it was "irrational propaganda of India".

"Whether it is Panjshir or elsewhere within Afghanistan, Pakistan has nothing to do with what is happening," the spokesperson added.

It is to be noted that the US and other countries have long accused Pakistan of supporting the Taliban. However, Pakistan has always denied it. But many of its military and intelligence institutions always maintained their links to groups like the Taliban.

Does Pakistan have its own drones?

Yes, is. In March 2015, Pakistan reported that it was using drones against terrorists operating in the tribal region of North Waziristan. The attack used a country-made 'Burrak drone' capable of carrying air-to-surface laser-guided missiles.

The Burak drone was designed and developed by Pakistan's National Engineering and Scientific Commission. There have also been reports that Pakistan has acquired long-range drones with the help of Turkey or China or both.

Last year, it was reported that Pakistan had bought a Chinese-made 'Wing Loong II'.

But the most important report is that Pakistan has acquired Chinese-made CH-4 drones. This drone can be used to gather intelligence as well as attack. These are the same drones that Saudi Arabia is using to fight Houthi rebels in Yemen.

According to the Defence Journal Gens Defence Weekly, CH-4 UAV is a type of unmanned vehicle.

It is not yet clear what version of it Pakistan has and whether it is still in use. Pakistani authorities have denied having long-range drones.

In addition, Pakistan has 2 drones near Shahpar. It can fly for up to 14 hours and can also be armed. Pakistan also has other drones, but they are used for surveillance. They cannot be equipped with missiles.

Can Pakistan use drones in Afghanistan?

At the moment, there is no concrete evidence of this. And many doubt it.

Open source investigators who have been tracking Pakistan's drone program for years have shared a picture of the CH-4 drone. This is the picture of July 12 this year. It can be seen on 'Google Earth'. It shows four drones at an airbase near Bahawalpur.

This picture may be useful in terms of assessing Pakistan's drone capabilities, but this cannot prove that these drones were recently used in Panjsheer.

Justin Bronk of the Royal United Services Institute in London suspects the involvement of these drones.

They point out that China's satellite communication network is used to achieve CH-4 long-range targets. "China cannot be willing to serve for attacks outside the Pakistani border," he says.

"In such a situation, CH-4 will need a direct line-of-vision radio control link from a ground station. This makes it extremely difficult to operate in the rugged terrain from the Pakistan border, but it is not impossible."

The question is also what Pakistan will achieve from this attack.

"Despite the question of whether Pakistan has drone capability or not, such an attack has no strategic advantages," says Dr. Maria Sultan, Islamabad's defense analyst.

"Given the latest situation in Afghanistan, Pakistan does not understand any strategic advantage of direct intervention there," says Justin Bronk.

Covid 19 Vaccine: Now children up to five years of age...