Analysis of BJP's first list in Bengal elections: Ghosh, who joined the party a day ago, got a ticket, not a single Muslim;IPS close to Mamta also got ticket 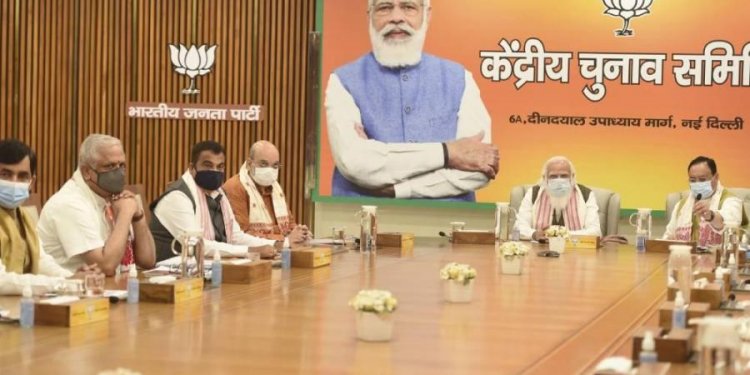 BJP has released the list of 57 candidates for the West Bengal assembly elections. In the list released for the first two phases elections, not a single Muslim has been made a candidate by the party. Political experts say that the BJP is trying to completely polarize Hindu votes here. In such a situation, it is possible that the party does not field a single Muslim candidate in the entire state. Tanmay Ghosh, who joined BJP a day before the ticket announcement, has been fielded from Vishnupur. Prior to this he was the Youth Town President of TMC in Vishnupur. The names of 12 SC, 7 ST candidates are also in the first list of the party.

The big name is Shubhendu Adhikari in the BJP's first list. He will contest from Mamta Banerjee's Nandigram. Dr. Vishwanath Chakraborty, professor and election analyst at Ravindra Bharti University, says, "No one else has been nominated from Shubhendu Adhikari's family as his family has decided that this time only Shubhendu will be in the election fray." Shubendu's father Shishir Adhikari has been a three-time MP. He was also the Minister for Rural Development in the UPA-2 government. Mamta Banerjee uprooted the Left  from Bengal by making Nandigram the issue. At the same time, Shubhendu is also considered to have a deep hold in Nandigram area. He won Nandigram seat in 2016 and after that he was appointed as Transport Minister in Mamta government. A few days ago, he left Trinamool and joined BJP.

CPM votes for BJP in Nandigram in 2019

Senior journalist Prabhakar Mani Tiwari says that the entire CPM vote had come to the BJP. TMC lost only about three and a half thousand votes. This time the CPM's grip on the ground is not very strong. In such a situation, BJP can go beyond this figure, because now Shubhend Adhikari is BJP candidate from Nandigram. Over 30% of the population in Nandigram is Muslim. Dalits are also in large numbers here. The BJP's focus is entirely on Hindu votes. Adhikari family has a good influence in this area. Experts say, "If Mamta loses to Nandigram, then there is a loss of power for sure." On the other hand, even if Shubhendu loses, BJP can send him to Rajya Sabha as the representative of Bengal.

Joining BJP not getting tickets in TMC

On Saturday, many Bengali actors joined the BJP. These include Rahul Chakraborty, Debashree Bhattacharya, besides former Trinamool MLA Dipali Saha, TMC Student Council State Secretary Kanishka Majumdar, TMC Youth Leader Sourav Roy Choudhary, Sayan Mukherjee, Subhankar. TMC has announced candidates for all its 291 seats. Those who have not got tickets, are now contacting the BJP. Political experts say that many former TMC MLAs and other ticket contenders may join BJP soon. BJP has only released the names of 57 candidates. The party will issue a list of phase wise tickets.

Two former IPS officers from Debra seat will stand face to face in the election this time. One of them is Humayun Kabir, who left the post of Police Commissioner only last month. He got a ticket from TMC. There is another, Bharti Ghosh. Bharti has been the commissioner of Jhargram and was once considered close to Mamata Banerjee. But, after joining early retirement, he joined BJP. She had already joined the party in the Lok Sabha held in 2019.

Why BJP did not become a slave even after being 'free'...