BJP's U-turn on Kapil Gurjar, who fired at Shaheen Bagh, canceled membership in a few hours

Kapil Gurjar aka Kapil Baisla joined the Bharatiya Janata Party (BJP) on Wednesday. However, after the news was shown in the media, the BJP canceled the membership of Kapil Gurjar. The attack was started by opposition parties after Kapil's inclusion in BJP. 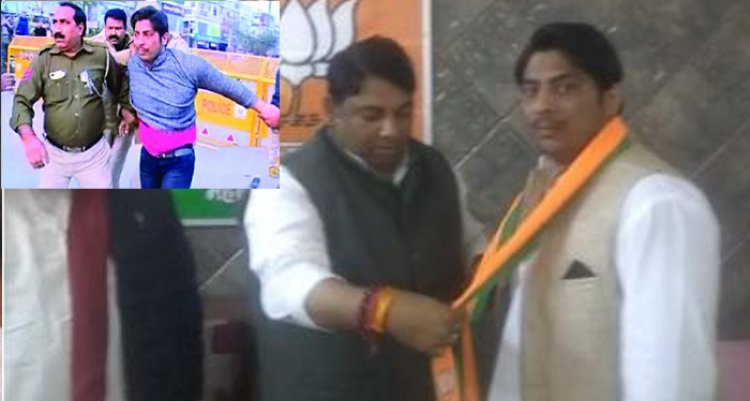 The Bharatiya Janata Party (BJP) on Wednesday canceled its membership membership of Kapil Gurjar alias Kapil Baisla, who came into the limelight by firing against the Citizenship Amendment Act (CAA) in Delhi's Shaheen Bagh, hours after joining the party.

Kapil Gurjar aka Kapil Baisla joined the Bharatiya Janata Party (BJP) on Wednesday. However, after the news was shown in the media, the BJP canceled the membership of Kapil Gurjar. The attack was started by opposition parties after Kapil's inclusion in BJP.

Regarding the cancellation of membership, BJP Metropolitan President Sanjeev Sharma says that in his cognizance there was no case of Kapil Gurjar firing at Shaheen Bagh. However, Kapil Gurjar's membership was canceled as soon as the matter came to the notice.

I work for Hindutva, but on the question of the Hindutva party bypassing you, Kapil Gurjar said, "Never mind I will keep working for Hindutva."

Photos were found with many leaders of your Aam Aadmi Party and Delhi Police also said that you have a relationship with the AAP party, to which they said, 'I had nothing to do with the Lok Sabha elections, then the leaders had come. At the time, I was photographed.

On inclusion and cancellation first, Bhardwaj attacked and said why did BJP give membership? Why unsubscribe now? This country and Delhi need to be understood. BJP spreads hatred. Property worth crores was destroyed in violence, many people died. Whether Anurag Thakur or Kapil Mishra or Kapil Gurjar all came out of BJP. It has become clear that the BJP script was working in the elections.

So at the same time, Aam Aadmi Party MP Sanjay Singh said that the BJP was attacking the Aam Aadmi Party with Kapil Gurjar, but Kapil who shot in Shaheen Bagh joined the BJP today. BJP's face has been exposed by dirty politics. To spread hatred to the people of Delhi, BJP apologized for rioting.