Myanmar protests: 21 protesters killed in Yangon on Sunday, claiming 38 killed across the country 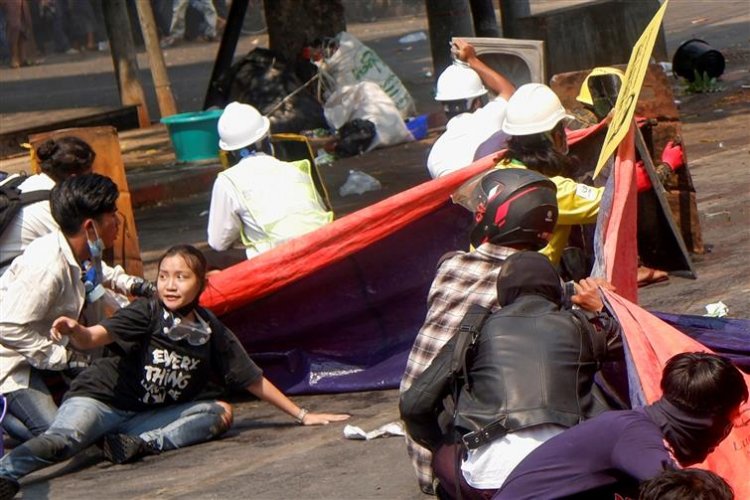 At least 21 protesters are reported to have been killed in violent clashes in Myanmar's main city of Yangon. Earlier, the leader of a group of Myanmar leaders had spoken of "revolution" against the officials.However, the Monitoring Group of The Assistant Association for Political Prescribers (AAPP) estimates that at least 38 people have died in the country on Sunday.

The group estimates that in addition to 21 people killed in Yangon on Sunday, people from other parts of the country have also been killed.Security forces opened fire on people protesting in Haling Thayer area of ​​Yangon, while the protesters also used sticks and knives.

Since the attack on Chinese businessmen, military officials have declared martial law in the area. Those protesting believe that China is supporting the military.Myanmar has been in the grip of protests ever since the military coup on February 1.On February 1, Myanmar's army took power after arresting several leaders, including the country's supreme leader Aung San Suu Kyi.

The army general Min Ong Hling, who followed the coup, has imposed a year of emergency in the country.The army has justified the coup by saying that the elections were rigged last year. In these elections, Aung San Suu Kyi's party National League for Democracy won unilaterally.

What happened in the election

In the election results that came on 8 November, the National League for Democracy Party won 83% of the seats. Many viewed this election as a referendum for the Aung San Suu Kyi government. This was the second election since the end of military rule in 2011.But the Myanmar army questioned these election results. A complaint was made by the Army against the President and the President of the Election Commission in the Supreme Court.

After the military coup, Army General Min Ong Hling has become the most powerful person in Myanmar. 64-year-old Hanging was due to retire in the month of July this year. But with the declaration of emergency, the grip of holing in Myanmar has become much stronger.But to reach here, Min Ong Flying has come a long way. After two unsuccessful attempts to enter the army, Hling received admission to the National Defense Academy for the third time.After this, he has gradually set the journey to reach the rank of General in the powerful army of Myanmar, Tatmadah.

INDvENG: India beat England by seven wickets in the second match of the T20 series