UP CM releases Chauri Chaura Postal Stamp, PM Modi to inaugurate the Centenary Celebration at 11:00AM

The Chauri-Chaura incident is an important event in the history of the Indian independence movement. It took place on 4th of February 1922 at Gorakhpur district of United Province (Currently Uttar Pradesh) when civilian set the Chauri Chaura Police station on fire, killing about 22 policemen and others. 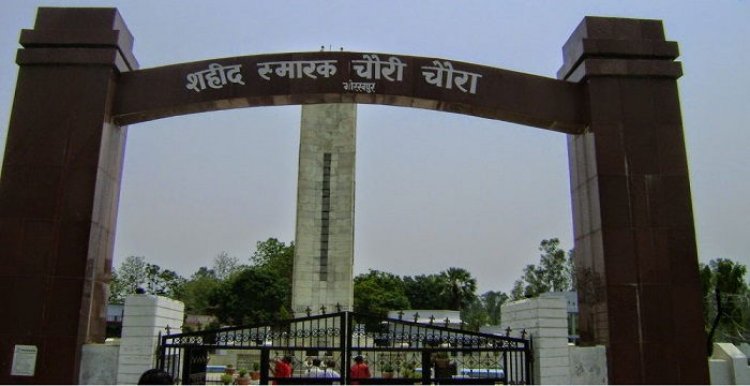 Uttar Pradesh Government is celebrating ththe ‘Centenary of Chauri Chaura’, this event will be virtually inaugurated by Prime Minister Narendra Modi at 11:00 AM IST, he will also the release the postal stamp dedicated to the centenary of year of Chauri Chaura Incident.

The Chauri-Chaura incident is an important event in the history of the Indian independence movement. It took place on 4th of February 1922 at Gorakhpur district of United Province (Currently Uttar Pradesh) when civilian set the Chauri Chaura Police station on fire, killing about 22 policemen and others.
It changed the way Indian Freedom Movement was taking it’s pace. This incident impacted Mahatma Gandhi to halt the non-cooperation movement.

On 2nd of February 1922, just 2 days before the incident took place, a retired army soldier Bhagwan Ahir was leading a group of volunteers who were participating in Non –Cooperation movement. They were protesting against Food Price Hike and Liquor Sale in marketplace.
The protest was soon stopped by local police followed by the the arrest of several leaders and protestors. This fuelled up the agitation of people, a protest was called on 4th of February. A part of agitated crowd gathered at local police station shouting slogans and demanding the release of their leaders and people.
To disperse the crowd, police charged with force and fire shots were open to the crowd. While it killed some protestors, the agitated crowd got more furious than before and set the police station ablaze. About 22 Indian policemen were killed.

After this incident, ‘Martial Law’ was declared in Chauri Chaura by British Authorities. Mahatma Gandhi perceived this incident as of his own culpability and set for 5 day fast. He was also arrested and sentenced for 6 year imprisonment but later released on ground of his ill health.
12th February 1922 , The Indian Nation Congress decided to halt the Non Cooperation Movement.
Total of 228 people were convicted and brought to trial on charged  of “Rioting and Arson” , the Session Court in its trial sentenced them to death .
But later on, Madan Mohan Molviya fought their case  and appealed to Allahabad High Court, the court in its judgment changed the death sentence of about 120 protestor into Lifetime imprisonment.
Memorial

To honour the martyrs of Chauri Chaura, Indian Railway have named a train “Chauri Chaura Expressa which runs between Gorakhpur and Kanpur.
A memorial Shaheed smarak was built by Indian Government to honour those who were hanged after the incident.
A memorial to deal policemen was also built by British Authority in 1923.