Agnipath Protest News: Modi's deception proved ineffective on the issue of employment, fire of Agnipath from north to south

Agnipath Protest News: The nationwide protest against the Agnipath scheme shows the horrors of unemployment. The Modi government needs to understand this in time. 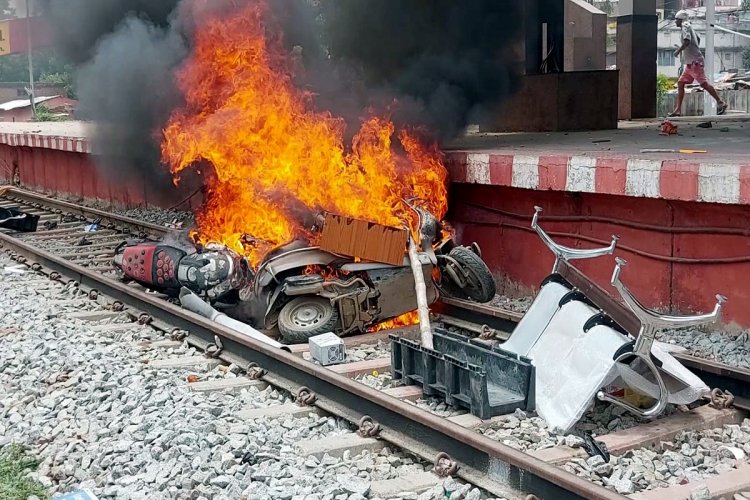 Agnipath Protest News: The opposition to the Agnipath scheme announced by the central government for recruitment in the Indian Army has reached its peak. Protesters have set fire to more than a dozen trains across the country. There is also information about the death of a person in the police firing in Secunderabad, Telangana. Despite this, instead of stopping the protest, the students are getting more and more furious.

Alam is that from the north to the south of the country, students have come out on the streets. That is, the fire of Agnipath has spread across the country. Instead of stopping the matter, the benefits of this scheme are being counted by the government. On the other hand, the students say that this is another eyewash in the name of employment from the Modi government. This time we will not be deceived like other schemes. Nor will he choose. Students say that we will stop the sit-in demonstration only after the Center withdraws from this scheme. That is, once again the possibility of worsening the atmosphere across the country is high. The only difference is that this time it will not be farmers of the country but unemployed youth and students on the roads.

In which states the fire of Agnipath

Why are BJP leaders on target of youth?

In fact, the youth and students are now tired of the BJP leaders' falsity, that is, the 2014 strategy or insistence of justifying their point of view on every issue and proving others wrong. On the issue of nationalism and Hinduism, the youth of the country kept showing patience, but are not ready to bear it anymore. This is the reason why the youth of the country are considering the recruitment scheme of the army as a new hoax presented by the Modi government in exchange for government jobs. The protesting students say that if the four-year stipend is a government job, since independence, thousands of students doing research after PG are given JRF and SRF, then should every research student consider it as a professor's job. Students are not able to digest this strategy of deceiving the youth of Modi and his ministers. This is the reason that in Bihar, students have attacked the residence of some MLAs including BJP's deputy CM Renu Devi and Tarkishore Prasad and BJP Bihar state president Sanjay Jaiswal. Despite this, Modi's minister Giriraj is not ready to learn. The protesters have even spoken about the attack on the vehicle of BJP MLA Lauria Vinay Bihari.

Even Delhi Metro is not safe from Agnipath fire

In the name of giving employment to the youth of the country, the fire of the Agnipath scheme of the Modi government has now knocked on the doors of the capital Delhi Metro. AISA, a student organization known for its hold in Jawaharlal Nehru University and many universities of the country, has taken to the streets against the Agnipath scheme, indicating that it is not ready to remain silent on this issue. AISA students have demonstrated strongly at Delhi's ITO intersection, telling the government what their intention is. In view of the demonstration of the students, the Delhi Metro Management closed the ITO Metro Entry Gate as a precautionary measure. Not only this, in view of the demonstration of students at Delhi's Dhasa metro station, there is information about closing the entry gate. AISA has made it clear that it would be better if the central government does not make this scheme of recruitment in the army a question of prestige.

PM does not understand the mood of the public, only the voice of friends is accepted by him

Central government is not ready to understand the depth of unemployment

Agnipath Protest News: In Telangana, TRS MLA KT Rama Rao has targeted the central government regarding the Agnipath scheme. He has said that the nationwide protest against the Agnipath scheme shows the magnitude of unemployment. He wrote in one of his tweets that the central government is first playing with the farmer of the country and now playing with the jawans of the country.