A month after the military coup in Myanmar, the violence continues unabated. At least 38 people died on Wednesday. 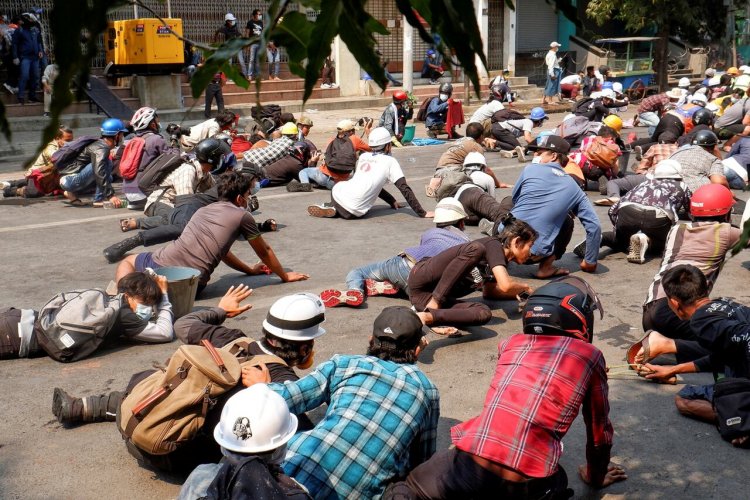 The United Nations has called it 'Bloody Wednesday'. United Nations Ambassador to Myanmar, Kristin Schrener has said that shocking footage is coming out from all over the country. Kristin also said, "It seems that security forces are using live bullets in firing."

Massive protests are taking place in Myanmar against the military coup on 1 February. Demonstrators are demanding that elected government leaders, including Aung San Suu Kyi, be released.

These leaders have been thrown out of power and jailed by the army. The protesters are also demanding an end to the military coup. Recent violence has come to light when the neighboring countries are urging the army to exercise restraint.

Kristin Schrenner says that 50 people have lost their lives since the coup and a large number of people have also been injured. Kristin said, "It is seen in a video that the police is beating up the unarmed people of the medical team." In one footage, it is seen that the protestor was shot and it seems that it has happened on the road. ''

Kristin Schrener has said that the UN should take a tough decision against Myanmar military officials. Pope Francis has urged for dialogue in exchange for persecution. Foreign ministers of neighboring South-East Asia countries have held a special meeting regarding Myanmar.

Only a few ministers asked the military rulers to release Aung San Suu Kyi. For the first time since 75 years of Suu Kyi detention, she had appeared in the court earlier this week via video link.

The army says the coup was fraudulent in the November general election and the National League for Democracy, or the NLD, won an overwhelming majority. But the army has not provided any evidence in support of this.

Chhattisgarh: These transgender women became part of the police force for the first...

Youngest are not interested in getting married in China,...

Storm warning in China, which is facing severe floods,...

Russia gave big indications about the supply of gas to...