Rainbow made in the sky of Mars, NASA's Mars rover took a terrific photo, know how it happened

NASA Percussion Mars Rover has captured a wonderful picture of the rainbow in the camera of the red planet. Although NASA says that it is not the rainbow but the camera lens is amazing. 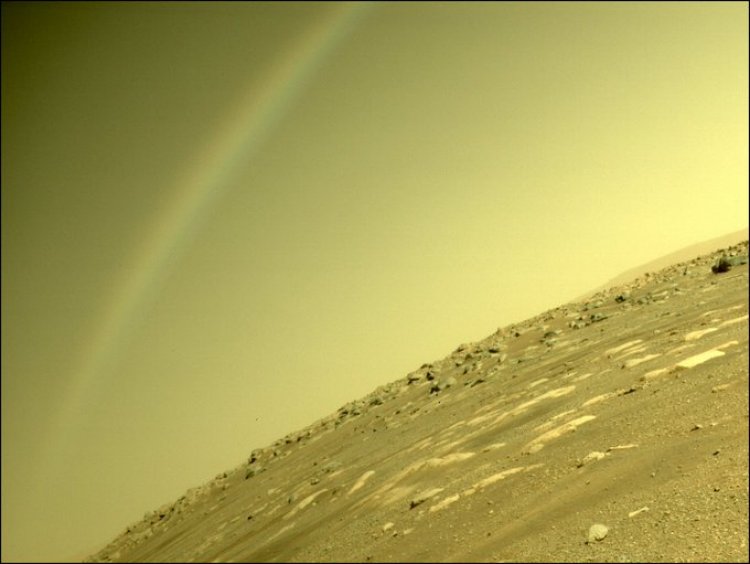 NASA Mars Rover Percussion sent on Mars has taken a wonderful photo in the sky there. In it, a rainbow is visible in the sky of Mars, which is also very beautiful. This is the first time a rover has captured such a thing in the camera so far away from the earth. Its information has been tweeted by NASA. It has also been said that many people are asking if it is a rainbow on the red planet. In response, NASA has said no. According to NASA, there cannot be a rainbow on Mars.

NASA says that the rainbow is made up of light reflections and small drops of water, but neither much water is present nor present in this state on Mars and here in terms of liquid water in the atmosphere here It is extremely cold. NASA has said that in fact, this iridescent shade seen in the sky of Mars is a glow of the lens mounted on the rover's camera.

Let us tell you that NASA's atmosphere is very dry where toxic carbon dioxide is present in the atmosphere for about 95 percent. Apart from this, 4 percent has nitrogen and aragon and one percent is oxygen and water vapor. In this way, chemical and physical Mars is quite different from Earth. Talking about this image taken by NASA's Mars rover, it was taken on February 18 when the rover touched the surface of Mars. A statement has been given by NASA on this.

Many have asked: Is that a rainbow on Mars? No. Rainbows aren't possible here. Rainbows are created by light reflected off of round water droplets, but there isn't enough water here to condense, and it’s too cold for liquid water in the atmosphere. This arc is a lens flare. pic.twitter.com/mIoSSuilJW

Dave Lavery, the program executive of NASA's Solar System Exploration, says that the line of colors seen in the picture may also be due to the dust in the sky of the red planet, which is shining in sunlight. It may also have some amazing lens luster. According to him, the moment the picture was taken, the rover was in the north direction and the mars were at two o'clock in the afternoon, according to the solar time. The camera was then south. In this sense, this is a better time while the brightness of the light may fall on the rover's camera. However, some experts also believe that one reason for the arrival of such photos may be icebo, which are in the polar region of Masr.

Significantly, NASA's parasite landed in the red planet's Zagiro crater in February. Its job is to find life here. This is NASA's 5th rover sent to Mars. For the first time, NASA has also sent a helicopter engineer to Mars, which is currently unloaded on its surface. With its flight, NASA has come close to creating another history. This flight is probably scheduled to take place on Thursday.

All American adults will be able to install Covid-19 vaccine from April 19, Biden...