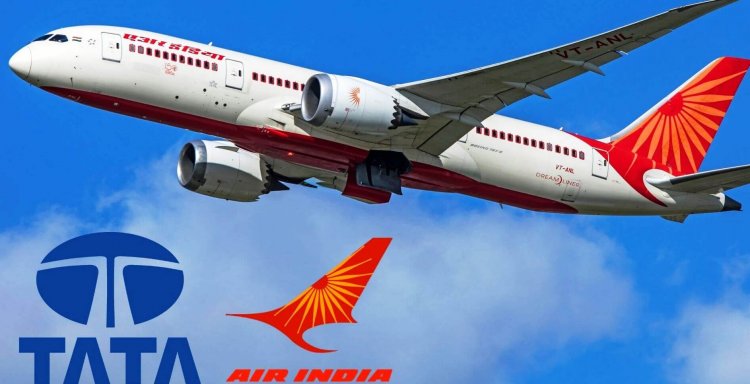 Tata Sons have bid for the acquisition of loss-making state-owned airline Air India. This information was given by the company spokesperson. On the other hand, the Department of Investment and Public Asset Management (DIPAM) informed that an interesting letter on the Air India acquisition has been received. With this, the process has reached its final stage.

Tata Sons, the holding company of Tata Group, submitted a letter of interest before the deadline expired on Monday. The government also made it clear that it has received several proposals for the acquisition of Air India. Dipam Secretary Tuhin Kant Pandey tweeted this information.
The process of selling Air India was started only in January 2020, but it was delayed continuously due to the corona epidemic. In April 2021, the government once again asked qualified companies to bid. September 15 was the last day to bid. In 2020 also, Tata Group had given a letter of interest on the acquisition of Air India.

The government had started efforts to auction Air India in 2017, but the companies had not shown interest then. In October, the government relaxed the Expression of Interest (EOL) rules after which some companies showed interest in buying debt-ridden Air India. It was under the new rules that the provisions of the loan were relaxed so that the owned company does not have to bear the entire loan.
Air India has been incurring losses since its merger with domestic operator Indian Airlines in 2007. The airline was founded by Tata as a mail career in 1932. Now, whichever company acquires ownership of it will get 4400 domestic flights, 1800 international landings, and parking space in the country.

If the government's deal with Tata is settled, the airline could return home after 67 years. Tata Group launched Air India in October 1932 in the name of Tata Airlines, which was taken over by the Government of India in 1953.

60,000 crore loan to the airline
At present, Air India has a debt of Rs 60,074 crore, but after the acquisition, the buyer will have to pay only Rs 23,286.5 crore. The remaining loan will be transferred to Air India Asset Holdings Limited created for a special purpose. This means that the rest of the debt will be borne by the government itself.

Counterattack: 'This organization of Muslim countries is hostage to Pakistan', India...