UK, France and US offer to increase military cooperation with INS Vikrant; Will help in bringing peace in the Indo-Pacific

French Ambassador to India Emanuel Lennon congratulated India for being among the countries with the potential to build its own aircraft carrier and expressed the hope that Vikrant and French aircraft carrier Charles de Gaulle would conduct joint exercises in the Indo-Pacific region. 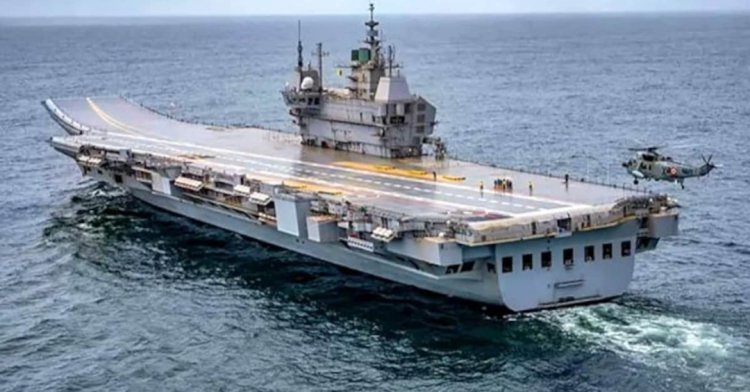 The induction of INS Vikrant into the Indian Navy is being viewed in a larger perspective, given the way the Indo-Pacific region has now come at the center of global diplomacy. The way India's strategic partner countries have seen India's first indigenous aircraft carrier joining the Indian Navy, the indications are clear. Countries like France, Britain, America have not only spoken of cooperating with Vikrant but have also said that INS Vikrant will help in making the Indo-Pacific region peaceful, equitable and equal opportunity for all.

It is believed that in the coming days, INS Vikrant will also participate in the joint nine military exercise Malabar with America, Japan, Australia. Diplomats of many countries have participated in the grand ceremony in which INS Vikrant was inducted into the Indian Navy on Friday at the Kochi Shipyard.

Britain's High Commissioner Alex Ellis, who participated in this, said that 'The landing of INS Vikrant in the sea on behalf of PM Narendra Modi is part of the process of making the sea an equal opportunity area for all. Britain also has a longstanding naval relationship with India and we hope that Britain will get a chance to cooperate with this ship too.

French Ambassador to India Emanuel Lennon congratulated India for being among the countries with the potential to build its own aircraft carrier and expressed the hope that Vikrant and French aircraft carrier Charles de Gaulle would conduct joint exercises in the Indo-Pacific region.

We will continue to work with India: America

In a tweet issued by the US Embassy in New Delhi, India has been congratulated that it has become one of the five countries in the world that have their own self-built aircraft carrier. We will continue to work with India to make the Indo-Pacific region free and equal opportunity for all. With the arrival of INS Vikrant, peace and stability will increase in the Indo-Pacific region.

It is noteworthy that the Ambassador of Russia, India's oldest military ally, Denis Elipov, was also present at the Kochi ceremony. He termed it as a great historical moment for India and its citizens. On the help received from Russia in making Vikrant, he said that it is a matter of pride for his country. It is also worth noting that along with the above countries, Indian Navy Chief Vice Admiral SN Ghormade has also said that the arrival of INS Vikrant will increase peace and stability in the Indo-Pacific region.

UK PM Race: Who will be the new PM of Britain; Voting is over today, who has the...

US: Senate to approve Eric Garcetti's name as India's a...

The danger of the Delta variant hovering over New Zeala...