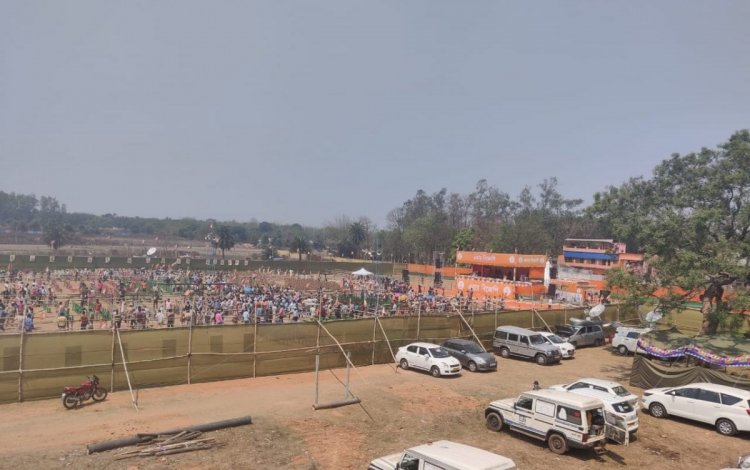 TMC said - Amit Shah did not come due to lack of people.State's ruling party TMC has made Amit Shah's absence in Jhargram a big issue.Party spokesperson Kunal Ghosh has alleged that "Shah was forced to change his decision to go there due to lack of crowd in the rally".

At the same time, Congress party's social media coordinator Gaurav Pandhi has made the same charge by tweeting some pictures and videos.He wrote, "Amit Shah's rally in West Bengal has had to be canceled due to the arrival of less people. The dock media will say that this is due to people maintaining social distancing, but the fact is that even before the first phase of voting The BJP's downfall has begun. "

Apart from the Congress and the TMC, videos of the venue of the rally are becoming viral on social media.NDTV journalist Manish tweeted a video of the venue of the rally saying that this meeting of Union Home Minister Amit Shah of Jhargram has to be postponed. It was officially told that there was a malfunction in the helicopter and if the opposition believes, it happened due to the lack of crowds as expected.

At the same time, BJP MP Subramanian Swamy tweeted that the TV channels are not telling anything on the broadcast of Amit Shah's rally. He wrote, "I opened the TV channel regarding the already announced Amit Shah's rally in Bengal rural area, but the schedule was postponed even at the scheduled time and the channels are silent about the broadcast. Any reason?"

Why the Jhargram Rally had to cancel ?

Amit Shah reached Kharagpur on Sunday and after spending the road show there, he spent the night in a hotel.On Monday morning, he was to address two rallies at Jamda in Jhargram and then at Ranibandh in Purulia.

Various speculations were made for Jamda's rally since morning. Jamda's BJP candidate Sukhmay Satpathy alleged, "BJP workers and supporters are not being allowed to go to the rally. They also got into a tussle with the police on the issue. Only then did it come to know that Shah's arrival is uncertain." "Local people say that the rally time was at 11 am. But till then the crowd did not gather in the ground, then the BJP leaders accused the police of stopping the supporters.BJP leaders alleged that vehicles taking supporters were stopped five kilometers away. People are facing a lot of trouble due to this.

However, BJP's Bengal in-charge Kailash Vijayvargiya had said in the morning, "Some technical problem has arisen in the helicopter. It is being considered to take Shah to the rally site by road. This is why the rally is delayed. But shortly after that the local leaders announced that Shah would give a speech in a virtual way instead of reaching the rally in a physical manner. "Shah later addressed the rally of Ranibandh. There he said that a technical glitch in the helicopter delayed him from reaching there.Even on this occasion, he targeted the ruling TMC and said that he would not accuse him of any conspiracy about the mess in the helicopter.

After allegations by TMC and Congress, Home Minister Amit Shah tweeted pictures of the rally at Jhargram, saying that he could not attend the rally but thanked everyone for reaching such a large number of people.

America sells most weapons in the world, China and Russia lag behind

Poisonous gas leaks from a factory in Andhra Pradesh, 50...