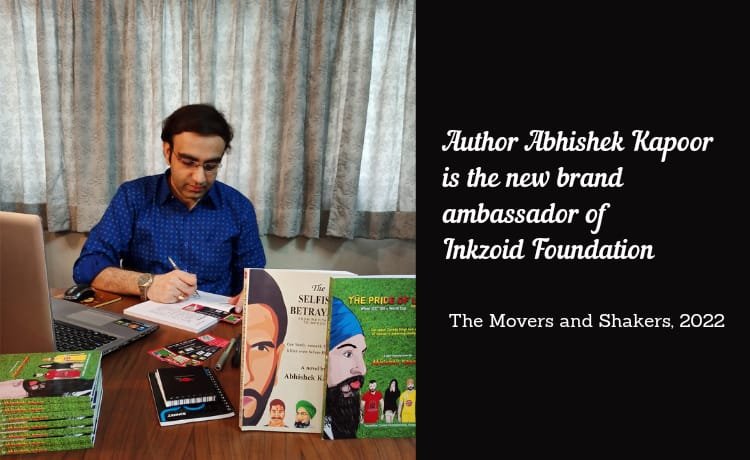 Abhishek Kapoor is an award-winning serial entrepreneur and international bestselling author known for beautifully written novels The Pride of t20 Cricket, and The Selfish Betrayals.

The Kanpur born entrepreneur is an alumnus of Seth Anand Ram Jaipuria School, which is UP’s topmost school, and PESIT (now PES University, Bangalore), which is the foremost engineering college of Karnataka. Just like most of his teachers, you may not call him an obsessive geek, but Abhishek has been the academic topper of his batch throughout his student life.

Having worked breifly with MNCs like Infosys, Nokia Siemens Networks, the Computer Science Engineer turned into a business person, joining his family business for sometime. Soon, he started working with tech startups as a mentor, and some of those went on receive funding of millions of dollars. He was also associated as a director with leading academic institutions at one point of time.

He always had interest in marketing, particularly Influencer Marketing, and that led to the start of Digital Golgappa which has grown into being one of India’s leading and most trusted marketing and PR agency. Champion in personal branding and brand promotions, this company has really made a huge impact in the marketing industry, now listed in Crunchbase as one of the most innovative companies in Asia-Pacific.

Abhishek has keen interest in making films and music. He has contributed as director, editor, music producer, writer, producer in several short films including Mannu, Ashwini, Basket, and many more. Some of them screened at international and national short film festivals. Abhishek is a member of Screenwriters Association, Mumbai, and even his novels are SWA registered, if any production house wants to go ahead with a movie or web series based on them.

While The Selfish Betrayals is a visual representation of thrilling scenes using the magic of words, The Pride of t20 Cricket is a cricket-based comedy that aims to bring a smile on its reader’s face. The language used and the hidden meanings in most sentences in the former is a bit difficult for novice readers, but the comedy book is much easier to read even for the beginners.

His love for music is not hidden from anyone. Though a fan of Punjabi Music in particular, Abhishek recently launched #DGMusic???? (under Digital Golgappa) which is a full-fledged music label that offers worldwide music release and promotion to all its artists. He collaborated with bestselling author Sneha Narayanan, and with world record holder multicolor artist Mekha Pradeep to release poem based music tracks, My Body My Choice, and Legendary of Arts respectively. Many other artists including Aneesh Chanawala, Sonam Chanawala are working on their songs and music releases with #DGMusic????.

Author Abhishek Kapoor was recently appointed as the brand ambassador of Kolkata based Inkzoid Foundation, one of the fastest growing startups of India.

The fastest growing publishing start-up is INKZOID FOUNDATION with ranking one for having more than 110 units within 10 months.

The fastest growing publishing start-up is INKZOID FOUNDATION with ranking one for having more than 110 units within 10 months and it is the only publication with Express Free Publishing (No Hidden Charges) just within 3 hours,they featured the maximum number of people on Google in the last 8 months and also honours deserving talents for full free of cost which is first time ever in the history.

INKZOID FOUNDATION is an UASL(international) & ISO certified independent international publishing chain and community organisation along with mass production house founded by world record holder and celebrity author,Durlav Sarkar and it is a place of creative people such as a hub of open mic event organisers,dancers, musicians,artists,podcast artists and photographers by promoting them that is why it is another name for opportunity.

He is also a poet, motivational speaker, influencer and works as a social activist as well famous for his 55 lyrical sonnets and each one of it was written within 5 mins.Six books were written on him as a tribute to him for all of his works and he was also awarded ‘Best Start-up 2021’ in support of West Bengal Government for his entrepreneurship being the Best Entrepreneur of 2021 setting an inspiration for the future generations.He also founded one NGO named ‘Love All Serve All’ which aims to serve mankind around the world.

The new variant of Corona is to be safe from Omicron, so follow these guidelines...

10 numbers are written on PAN card, which number is special,...

3 places to visit in Rajasthan to get a glimpse of Indian...