Use of force against protesters in Myanmar, curfew in many cities, Singapore appeals - don't fire on unarmed

The anger of the people against the military coup in Myanmar is rising continuously. Despite all the restrictions, thousands of protesters took to the streets and protested the coup in several cities including the capital Napita and Yangon. 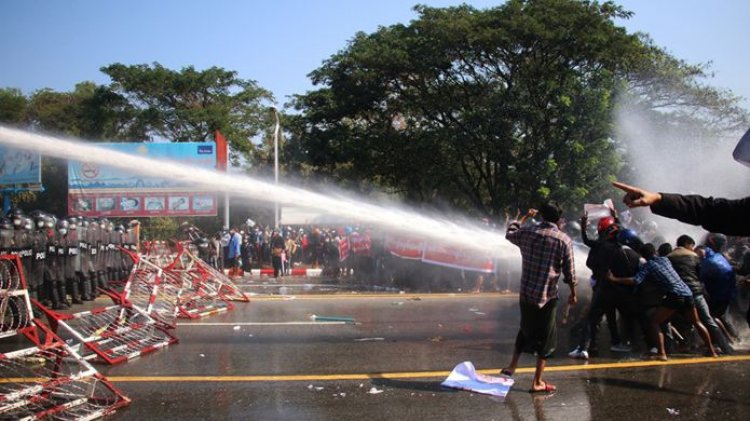 Yangon, agencies: The anger of the people against the military coup in Myanmar is rising continuously. Despite numerous restrictions, thousands of protesters took to the streets and protested the coup in several cities, including the capital Napita and Yangon. Police used force at several places to drive out the protesters. In some places strong water splashes were also used.

Curfew in many cities

Myanmar's army came to power on February 1, overthrowing the National League for Democracy (NLD) government. Several top leaders including the country's supreme leader Aung San Suu Kyi were detained. Since then, a round of protests has continued throughout the country. The army has imposed curfew in several cities, along with curbing the gathering of people in an attempt to curb the demonstrations. Internet has also been banned.

The military rulers have appealed to the government employees to return to offices, along with promising to hold fresh elections in the country. It has also warned that action will be taken against those who do not return to work. Despite this, people are protesting.

Clash between protesters and police

Thousands of people took to the streets in Yangon and Napita on Thursday and expressed their anger through banners and posters in a peaceful manner. People protested in Bagan, the country's oldest city. Earlier in Myanmar's second largest city Mandalay, there was a clash between protesters and police on Wednesday night. The sound of gunfire was also heard here.

Singapore appeals, do not fire

Singapore's foreign ministry has appealed not to fire unarmed protesters under any circumstances. There have been many cases of police firing on protesters after the coup in Myanmar.