Ground report from West Bengal: TMC's emphasis on Bengal's daughter's slogan, BJP's focus on polarization; Even posters and banners of the Left-Congress are not visible.

The assembly election dates in West Bengal have been announced on Friday, but the political tussle between BJP and Trinamool has been going on for the last 2 years. 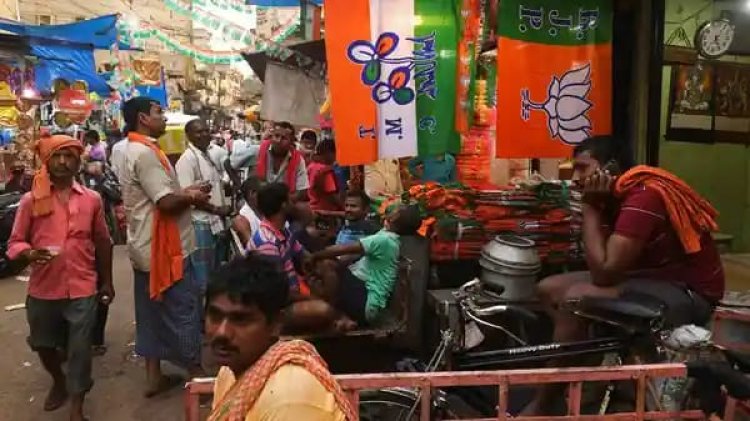 The assembly election dates in West Bengal have been announced on Friday, but the political tussle between BJP and Trinamool has been going on for the last 2 years. From religious events like Durga Puja to events like Ravindranath Thakur, the birth anniversary of Netaji Subhash Chandra Bose, a lot of politics has been achieved. Now the Central Government's CBI and the State Government's CID have also been entered in this fight. The CBI has issued a notice to the wife of Abhishek, nephew of Mamta Banerjee in the coal scam. Meanwhile, the state government's CID arrested Bengal BJP leader Pamela Goswami in a cocaine case.

Both parties are accusing each other of misuse of government agencies. Now allegations have also started against the announcement of election dates. Chief Minister Mamata Banerjee questioned the 8-phase elections in the state and said, "When elections are being held in one phase in states like Tamil Nadu and Assam, then why the elections in Bengal in 8 phases?" What was the need for elections in the same district in two phases. ' On this charge, BJP state spokesperson Samik Bhattacharya says, "In 2011, it was Mamata Banerjee who appealed to hold elections in more stages." Elections should be conducted in a peaceful manner, hence, 8 rounds are being conducted.
The BJP is considered strong in the areas of South Bengal and Junglemahal. Most of the districts in this area have elections in one or two phases, while in Mamta's hold Murshidabad, Malda, Howrah, Hooghly, South North Parganas elections are held in different phases. Apart from this, elections for 43 assembly seats of the sixth phase are on the next day of Ram Navami on 22 April. Trinamool leaders say that this has been done intentionally. The BJP wants to play the Ram card in these areas.

There is a possibility of large scale violence in elections
A day before the announcement of elections, BJP national president JP Nadda had a program in North 24 Parganas district, but before he reached there, there was a violent clash between BJP and Trinamool workers in Shyamnagar. The bomb went on behalf of the workers of both parties. This type of violence has become common in Bengal these days. Says a local politician from Bengal, "The violent political clash between the activists in the state is very old, but this time there can be a large-scale political violence during elections.
Left-Congress flags and banners are also not seen
The Trinamool and the BJP have been busy in electoral preparations for a long time, but the Left camp, which ruled Bengal for 34 years, has no movement even after the announcement of elections. Congress is also in the same situation. Urban areas are covered with BJP-Trinamool flags, but the Left-Congress posters and banners are not seen even after looking closely. Left activists say that our base is in rural areas, dates have been announced, now our campaign will get faster.

Fighting for Owaisi's party is also a factor in Bengal. On 25 February last, Owaisi was to hold a big rally in Kolkata, but it was not allowed by the Mamata Banerjee government. After which he attacked the Mamata government in a press conference in Hyderabad. Muslim voters are decisive in over 100 assembly seats in Bengal. Mamta Banerjee may suffer some loss due to Owaisi contesting the election.

Sonia Gandhi is worried about making Rahul Gandhi the PM:...