All the opposition leaders including Rahul Gandhi are raising slogans by joining the protest of farmers reaching Jantar Mantar. This decision was taken by the leaders of 14 opposition parties in the meeting held this morning. The meeting took place in the office of Leader of Opposition in Rajya Sabha Mallikarjun Kharge. 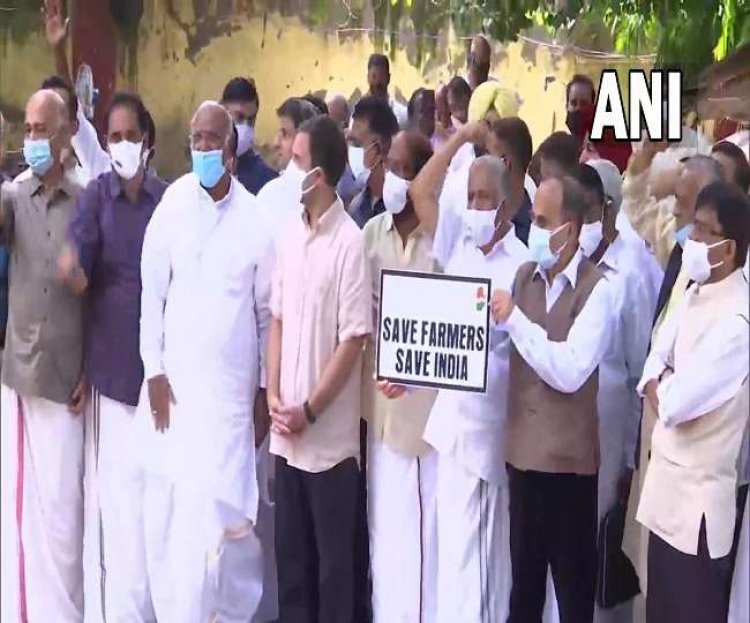 The opposition has decided to continue with the demand for discussion on Pegasus spying episode, hike in petrol and diesel prices and agricultural laws. In this sequence, on Friday, leaders of all opposition parties including Rahul Gandhi reached Jantar Mantar by bus and raised slogans by joining the farmers' protest. He also demanded the repeal of agricultural laws.

Targeting the government, Congress leader Rahul Gandhi said, "Today all the opposition parties have given their full support for the removal of black laws. We want to talk about Pegasus in Parliament, but there they are not allowing Pegasus to be talked about. Narendra Modi has entered every Indian's phone.

#WATCH | Congress leader Rahul Gandhi and other Opposition leaders reach Jantar Mantar, Delhi to extend support to farmers in their protest against farm laws by raising slogans with a placard 'Save Farmers, Save India' pic.twitter.com/VMyi4ShlYo

In the meeting this morning, the leaders of opposition parties had also talked about joining the farmers' protest at Jantar Mantar. All these leaders had decided to walk from Parliament to Jantar Mantar in support of the farmers. Let us tell you that this meeting took place in the office of Leader of Opposition in Rajya Sabha Mallikarjun Kharge. Apart from Rahul Gandhi, Leader of Opposition in Rajya Sabha Mallikarjun Kharge, senior Congress leaders Anand Sharma and Jairam Ramesh, DMK's TR Baalu, Shiv Sena's Sanjay Raut and leaders of other opposition parties attended the meeting. A symbolic 'Parliament' has been organized for the last few days at Jantar Mantar for their demands. The demand of the farmers' organizations is to repeal all the three laws and make a law to guarantee the minimum support price.

The question of security of Kabul airport, Turkey's conditions not acceptable to...