Ranveer Singh's all hopes this year are now pinned on new age superhit entertainer director Rohit Shetty. Taking new inspiration from Shakespeare's short story 'Comedy of Errors', he has made a film for a completely new era and is filled with the colors of the old era. 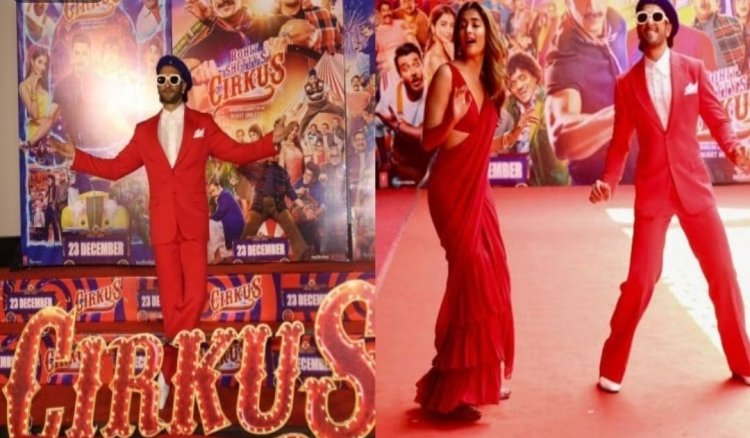 This time it is about the confusion of the double roles of Ranveer Singh and Varun Sharma. There are so many actors in the film with these two that the audience is going to laugh a lot even remembering their count. The name of the film is 'Cirkus' and on its trailer launch there was a lot of Cirkus in Mumbai on Friday.

Ranveer Singh looks absolutely amazing at the trailer launch of Rohit Shetty directorial 'Cirkus'. Dressed in a red outfit, his energy and enthusiasm was palpable when he took to the stage in his familiar style. Ranveer's somewhat similar style is also seen in the trailer of the film in which he is seen trying to clean bowl the audience with his tickling performance. In the era of heroes with superpowers, this film is going to present Ranveer as Electric Man.

Although Ranveer Singh in his previous film 'Jayeshbhai Jordaar' had blown some splashes of comedy towards his fans, but the comedy connection of Rohit Shetty and Ranveer Singh is looking amazing. At the trailer launch, Ranveer also showed a few glimpses of it and Deepika Padukone's presence in the trailer has sent the internet into a tizzy. Where Pooja Hegde danced with Deepika on stage and Ranveer Singh became Raja Babu and danced a lot with her.

Apart from Deepika Padukone, Ajay Devgan is also going to be seen in a special role in this story of sixty years back. Apart from super star Ranveer Singh, the film 'Cirkus' is full of strong actors like Pooja Hegde, Jacqueline Fernandez, Varun Sharma, Johnny Lever, Siddharth Jadhav, Sanjay Mishra, Tiku Talsania, Vrajesh Hirji, Ashwini Kalsekar. After this film which is going to release on December 23, Ranveer Singh is going to announce some big bangs soon.

Winter Skin Care: maintain your face glow and softness in winter by using these ...

Pathaan Controversy: Why there is ruckus on Shah Rukh K...