The final match of the World Cup 2011 was played on this day at the Wankhede Stadium in Mumbai, in which host India won. The toss was thrown not once but twice in this great box because a little confusion was created. 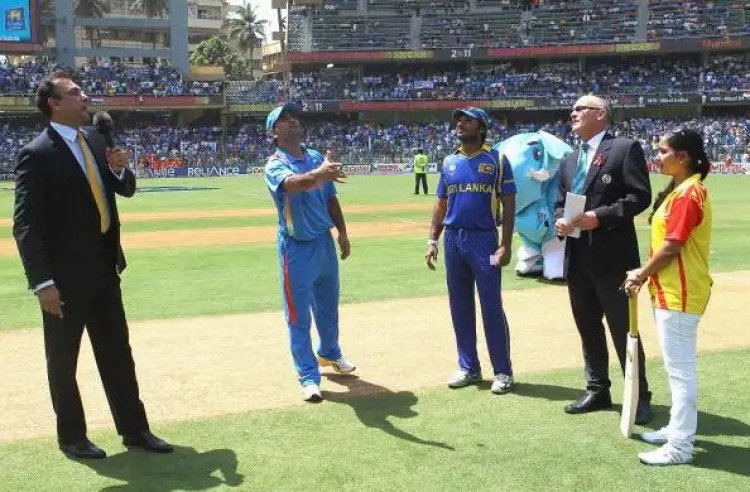 If you have ever been a street cricketer, then you must be aware that if there is a small omission during the toss, then it is the second toss. Well, in Gully cricket, less than a coin is tossed on a pouch with the address of Hindi or English, but if this toss is attached to someone's body, then it is done again, but the same if in international cricket and that If you are in the finals of a huge tournament like World Cup, what would you call it?

Yes, the final of the World Cup 2011 played at Wankhede Stadium in Mumbai between India and Sri Lanka was tossed not once, but twice. The story behind this is also very interesting, but the good thing is that no team or even the International Cricket Council had any problem with this. Now know what finally happened in the final of a big tournament like World Cup, when the toss was hit twice.

In fact, for the final of the World Cup 2011, match referee Jeff Crowe, Indian captain MS Dhoni and Sri Lankan captain Kumar Sangakkara as well as the toss presenter were on the pitch for the toss. MS Dhoni hoisted the coin in the air, but the noise at the packed Mumbai stadium was so loud that the match referee Jeff Crowe could not hear Sangakkara's voice (head or tail). In such a situation, it was decided that it would be tossed again.

Talking about that match, the toss was thrown twice in this match, in which skipper Mahendra Singh Dhoni and the match referee did not hear the voice (head or tail) of Sri Lankan captain Kumar Sangakkara amidst the echoing voice of around 33 thousand people. This was the reason why it was tossed again in the final like World Cup. In the second toss, the Sri Lankan team won the toss and decided to bat first.

The Sri Lankan team, batting first, scored 274 runs at the loss of 6 wickets in 50 overs on the basis of Mahela Jayawardene's century. According to the World Cup final, this score was considered very good for the Sri Lankan team, because the record of Mumbai's Wankhede Stadium was also such that the team that bats first will have more chances to win. Above all, this match was also the final of the World Cup.

However, the Indian team got two lashes in the first over as Virender Sehwag and then later Sachin Tendulkar and the team came under pressure, but Gautam Gambhir (97 runs) batted brilliantly at No.3 and Virat Kohli (35) More than 80 runs were shared for the third wicket with Gambhir and then Gambhir pulled off the match with MS Dhoni (91). Later, Yuvraj and Dhoni finished the match and won the World Cup to India after 28 years.