Ranveer Singh's 'Cirkus' is ready to rock on Christmas, funny poster of the comedy film released!

The motion poster of Ranveer Singh's next film 'Cirkus' was shared on Friday. There is a lot of comedy in this film of director Rohit Shetty. Along with Ranveer, there are also funny actors like Sanjay Mishra and Johnny Lever. Along with the motion poster of 'Cirkus', the makers have also told that the trailer of the film is coming now. 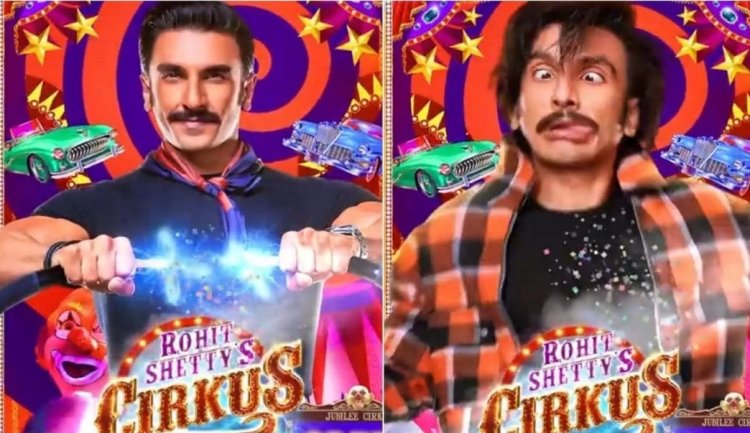 The combo of director Rohit Shetty and actor Ranveer Singh has given a blockbuster film like 'Simmba' to the public. Now once again this pair is coming with a funny film, but this time the story is not serious, but this time Rohit Shetty is coming with a comedy film. The name of the film itself is 'Circks', so it is not a difficult task to imagine how tremendous the dose of entertainment will be in it.

Earlier, Rohit Shetty has made funny comedy films like 'Golmaal' franchise, 'All the Best' and 'Bol Bachchan'. Rohit's comedy style with an energy-filled performer like Ranveer Singh has the potential to create a storm of comedy on screen. And this thing is clearly visible in the motion poster of 'Cirkus', which the makers shared on Friday. Sharing the motion poster of 'Cirkus' on social media, Ranveer Singh wrote, 'Before the trailer comes next week, meet our 'Cirkus' family.'

The stellar cast of 'Cirkus'

Ranveer Singh has not yet done any such film which is a complete comedy film, but this matter is about to change with 'Cirkus'. It has been told in the reports that Ranveer is going to play a double role for the first time in the film. Pooja Hegde and Jacqueline Fernandez are the actresses of the film with them. The actors whose names are in the supporting cast of 'Cirkus' are a guarantee of solid comedy in themselves.

Actors like Johnny Lever, Sanjay Mishra, Siddharth Jadhav, Vrajesh Hirjee, Tiku Talsania and Mukesh Tiwari are going to create an atmosphere of comedy in 'Cirkus'. Among the characters of the film shown in the motion poster, there are many other faces who are often seen in Rohit Shetty's films such as Vijay Patkar.

Rohit Shetty and Ranveer Singh's 'Cirkus' is coming to entertain the public on the occasion of Christmas. There have been reports that the trailer of 'Circus' is going to be released on 2nd December and after Ranveer's post, this thing seems to be confirmed. 'Cirkus' will be released in theaters on 23 December.

Talking about Ranveer Singh's films, in 2022 his film 'Jayeshbhai Jordaar' flopped badly in theatres. Earlier, his film '83', which came at the end of last year, was also not able to earn well. In such a situation, Ranveer is in great need of a hit film. The motion poster of 'Cirkus', the looks of the actors working in the film and the background music look very fun. If the film also turns out to be as entertaining as this, then Bollywood will have every chance of getting a powerful hit film in the last week of the year.

Unhealthy Foods Kids should avoid: Do not give these 5 things to children in exc...

know the story of a Young and talented Shining Superstar who is ruling the heart...

Amidst the news of marriage, Kiara Advani's photoshoot ...