Ruturaj Gaikwad hit 7 sixes in one over, created history by scoring an unbeaten 220 runs with 16 sixes in the innings

Ruturaj Gaikwad Maharashtra's opener batsman Ruturaj Gaikwad played such an innings in the second quarter-final match of Vijay Hazare Trophy 2022 that the whole world kept watching. He did the feat of hitting 7 sixes in an over for the first time in Indian cricket history. 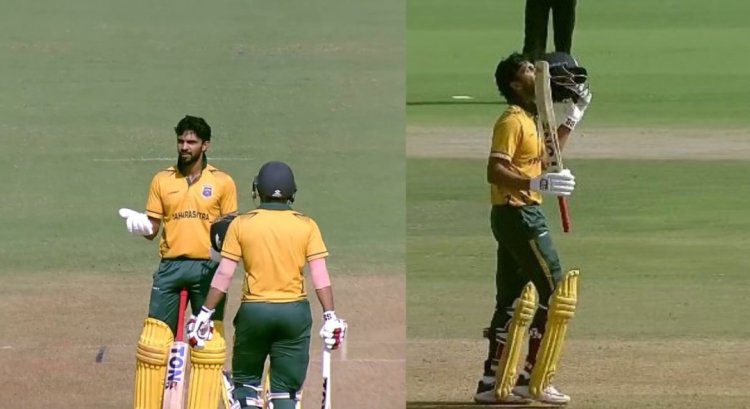 In the history of Indian cricket, which had never happened before, Ruturaj Gaikwad did it amazingly. In the second quarter-final match of Vijay Hazare Trophy 2022, he scored an unbeaten 220 while batting tremendously against Uttar Pradesh. During this innings, he hit 16 sixes and 10 fours while he faced 159 balls. In this innings, Rituraj Gaikwad did a wonderful job of hitting 7 sixes in one over and created history.

Ruturaj Gaikwad hit 7 sixes in one over

In the 49th over of the first innings against Uttar Pradesh, Ruturaj Gaikwad created history by hitting Shiva Singh for 7 sixes in one over. Ruturaj Gaikwad became the first batsman in the world to hit 7 sixes in an over in List A cricket. He hit one of these no balls, which was the fifth ball of the over. That is, he scored 43 runs in this over and is a unique record in itself. This was also Ruturaj's biggest score till date in List A cricket. In this match, he completed his first 100 runs in 109 balls while he scored 120 runs in the next 50 balls. On the basis of his innings, Maharashtra scored 330 runs for 5 wickets in 50 overs.

Who will replace Hardik Pandya in Team India? Rohit Sha...

IND vs SL: check out the full list of Team India squad ...