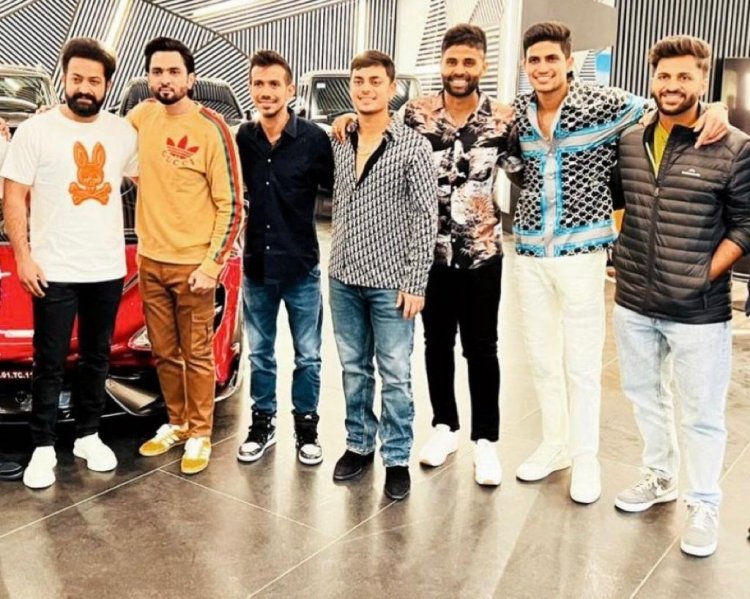 Indian Team Meets Jr. NTR: The three-match ODI series between India and New Zealand is going to start from January 18. The first match between the two teams will be played at the Rajiv Gandhi International Cricket Stadium in Hyderabad. At the same time, before this match, many Indian players including Indian team's star batsman Suryakumar Yadav, Shubman Gill, Ishaan Kishan reached his house to meet South film star Junior NTR. The picture of Indian players with Junior NTR is becoming increasingly viral on social media.

Before the first match of the ODI series against New Zealand in Hyderabad, many star players of Team India came to meet Junior NTR, the big superstar of South Industry. The picture of Indian team players with NTR is also going viral on social media. Suryakumar Yadav, Yuzvendra Chahal, Ishaan Kishan, Shubman Gill and Shardul Thakur are seen in this photo.

Let us tell you that before the last match of the three-match ODI series against Sri Lanka, the players of the Indian team had also reached the Padmanabhaswamy temple in Trivandrum. There all the players took the blessings of God by worshiping before the match.

Junior NTR's movie RRR has recently got huge success on the international stage. Actually, the song Nato – Nato of this film has recently received the Golden Globe Award 2023. The song has received this award for Best Original Song. In the joy of getting this award, the players of the Indian team reached Junior NTR's house to congratulate him and have a party.

The Last Of US: based on the action-adventure game, enjoy the series on this OTT...

IND vs SL: check out the full list of Team India squad ...

Jasprit Bumrah was ruled out of the first T20I against ...