Booking for Maruti Suzuki Alto K10 has been started. It can be booked by paying Rs 11000. At the same time, information about its exterior look and design has also been leaked. It is estimated that it can be launched by mid 2023. 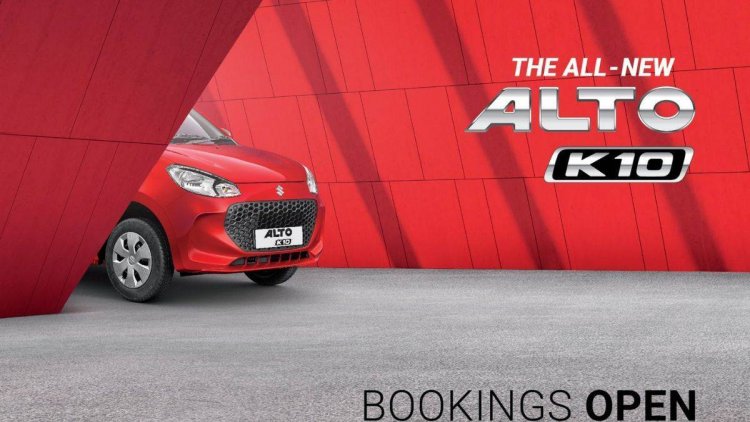 Maruti Suzuki Alto K10: A few days back, Maruti released the teaser video of its new Alto K10, in which its booking details were told. However, with this the exterior look of the Alto K10 has also been revealed. In this, it is seen in brilliant red color.

For information, let us tell you that the booking of Alto K10 has been started in India. It can be booked with a token money of Rs 11,000 and you can book it by visiting the company's official website. At the same time, the company will sell it under its Arena brand.

These features will be available in the exterior of Alto K10

The teaser picture shows that the Alto will sport teardrop-shaped halogen headlamps and a large single-piece front grille. At the rear, the Alto gets a square tail lamp, K10 badging and bumper-mounted number plate recess. Also, boxy stances are seen in it. However, being an entry-level hatchback car, it does not show fog lamps and has been given steel wheels.

The new Alto has a special K10 engine

The highlight of the new Alto is its K10 engine, from which it is also named. It will be a 1.0-litre petrol engine that will generate 66bhp of power and 89Nm of torque with a gasoline mill. Let us tell you that this engine has also been given to the S-Presso and the new Celerio model. For transmission, the Alto K10 will be mated to a five-speed manual and an AMT unit.

The new Alto K10 will come as the next generation model. For information, let us tell you that K10 was first introduced in India in 2010 and was discontinued in 2020. After two years, it is likely to come between Rs 3.50 lakh and Rs 5.50 lakh as a new generation model. Also it can be launched by next year.

Weather Update Today: Rainy season will start in these states including UP, Delhi,...