Asia Cup 2022: Hong Kong player Kinchit Shah proposes to his girlfriend in a film style in the audience, wears a ring

After the match was over, he headed straight towards the stand where his girlfriend was watching the match. A little bit reached him and sitting on his knees expressed love in front of his girlfriend and proposed. 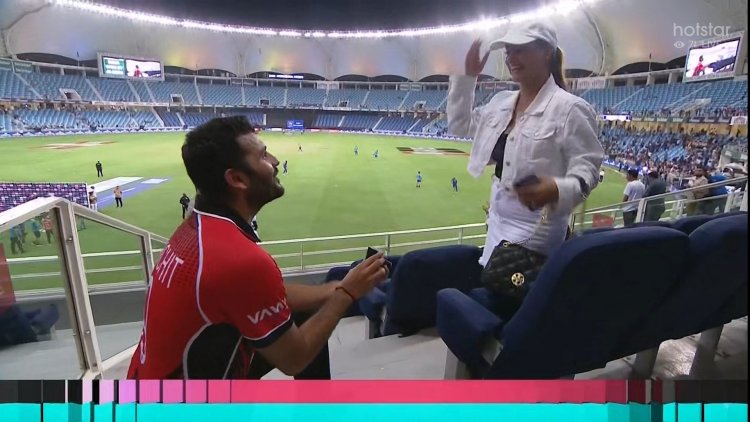 In fact, after the end of the match, Kinchit Shah went straight to the stand where his girlfriend was watching the match.  Somehow reached him and, sitting on his knees, expressed love in front of his girlfriend and proposed.  It was a surprise for his girlfriend, seeing that his girlfriend was surprised.  Seeing this scene, the entire Hong Kong team was applauding with enthusiasm.

Proposal after the match by Kinchit Shah and she said "Yes". pic.twitter.com/ltxJhjyspP — Johns. (@CricCrazyJohns) August 31, 2022

The commentator also became a witness to this moment

His girlfriend extended his hand to Kinchint and accepting the proposal, he extended his hand to wear the ring.  A little bit again put the ring on the girlfriend's finger.  Commentators Gautam Gambhir, Sanjay Bangar and show host Jatin Sapru were also mesmerized watching this scene through the big screen.  Let us tell you that Kinchit Shah scored 30 runs in 28 balls, which included 2 fours and 1 six.  Babar Hayat scored the highest 41 runs for Hong Kong.

Suryakumar Yadav's scintillating half-century helped India qualify for the Super-4 beating Hong Kong by 40 runs in the Asia Cup T20 match in Dubai on Wednesday.  Suryakumar played an unbeaten 68 off 26 balls and with the help of his innings, India scored 192 runs for two wickets in 20 overs.  Suryakumar hit six fours and six sixes in his innings.

Suryakumar was well supported by former captain Virat Kohli who played an unbeaten knock of 59 runs in 44 balls.  At the same time, Kohli hit one four and three sixes during this period.  Both the batsmen shared an unbeaten partnership of 98 runs in 42 balls for the third wicket.  While Kohli scored the 31st T20 fifty of his career, Suryakumar scored his sixth T20 fifty.

Hair Care Tips: If you want to get silky and shiny hair, then definitely include...

UK PM Oath: There will be no swearing-in ceremony of the new Prime Minister at B...

Ind vs SA: know which bowler get the chance to play in ...