Comparison is not a part of my life I'm still 24 - Rishabh Pant confronts Harsha Bhogle in a live interview! Watch Video

Wicket-keeper batsman Rishabh Pant is struggling with poor form on the tour of New Zealand. Questions are being raised about his place, meanwhile Rishabh himself has given an answer. 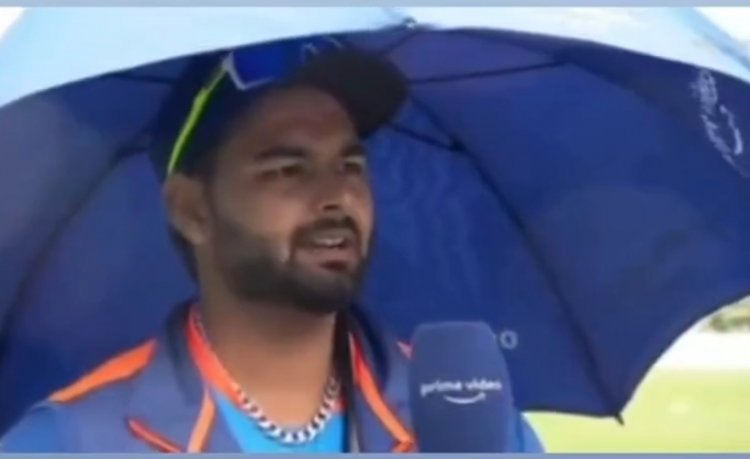 Questions are constantly being raised on the poor form of Team India's vice-captain Rishabh Pant on the tour of New Zealand. Rishabh Pant is getting chances in playing-11 and Sanju Samson has to sit out. In the midst of being constantly targeted, Rishabh Pant himself has spoken about his form and has directly said that my numbers are not that bad either. In the interview with commentator Harsha Bhogle, Rishabh Pant appeared to be somewhat upset, however, shortly after making this statement, Rishabh Pant was dismissed after scoring only 10 runs in the third ODI.

What about batting order - Harsha Bhogle

Before the match, commentator Harsha Bhogle spoke to Rishabh Pant. Rishabh said here that I would like to open in T20 cricket, while in ODIs number 4 or 5 is correct and in Tests I bat at number-5. But things depend on how the coach and captain think better for the team. Whenever I get a chance, I try to do well.

Rishabh Pant got offended when harsha asked him about his form says"yes my T20I numbers are not great but I'm still 24 and there's no time to compare" the confidence shows how strongly he is backed.
Video credit: @PrimeVideo pic.twitter.com/X6xkxeOZOK — SAMSONITE???? (@thesuperroyal) November 30, 2022

It is not right to compare - Rishabh pant

During the conversation, when Harsha Bhogle said that your numbers are good in Tests, but not so good in ODIs and T20s. On which Rishabh Pant said that my numbers in white ball cricket are not that bad, I am only 24-25 years old and it is not right to compare in such a situation. When I will be 30-32, then such comparisons can be done. During this, Rishabh Pant was seen getting upset and there was a change in his tone while replying to Harsha Bhogle.

Seeing this interview of Rishabh Pant went viral and people did not like the way he talked to commentator Harsha Bhogle. Many Twitter users said that this is the arrogance of Rishabh Pant, which he should handle. Apart from this, many people said that how Rishabh Pant has become angry on a question.

Saw a 15 second clip of Rishabh Pant going all aggressive in his answer to Harsha.

Can someone share the gist of what he was asked and what triggered him? Anu links to watch the full interview?#NZvIND — Vinod Ramnath (@NaanumEngineer) November 30, 2022

Significantly, Rishabh Pant got two chances in the T20 World Cup as well, but he failed in them. After this, the New Zealand tour also did not go well for him, which is why questions are being raised about his performance in white ball cricket. There is World Cup in the next one year, in such a situation, thinking has already started.

The Kashmir Files: Terror supporters and Genocide deniers can never silence me -...

King Charles III will inaugurate the newly built Sikh Gurdwara in Britain, will ...

BCCI Election: A historic decision of Roger Binny to be...

Who will replace Hardik Pandya in Team India? Rohit Sha...